The beautiful Baha’i Gardens in Haifa.

Our journey through the Holy Land was coming close to the end. We reluctantly left the Sea of Galilee and made our way west back toward the Mediterranean coast. It was fun to see random ruins along the side of the road. Our guide explained that in ancient times, inns dotted the roadway and were spread apart within a day of walking so travelers always had places to stay.

We drove through the Jezreel Valley, the area where Elijah worked and lived. It was in this region he met a widow and her son who were about to starve to death but fed him anyway and in return God took care of them. The drive through the country didn’t take long—it’s a pretty small country, so in no time we were on the coast at the port town of Haifa. 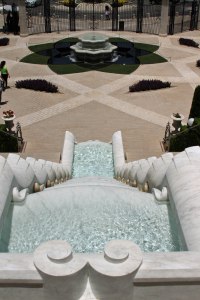 A cascading waterfall leads down to the bottom of the Baha’i Gardens.

A friend of mine whose family lives in east Jerusalem and who visits her family each year, gave me some invaluable advice on what to do and see while in the Holy Land. I was very grateful for her suggestions, especially the recommendation to visit the Baha’i Gardens. We parked on the street and walked up to the entrance, all along getting a spectacular view of the steep hill filled with gorgeous trees, greenery, flowers, and a waterfall.

Our guide once again tried to dissuade us of going there but I ignored her and walked up to the entrance and into the gardens. I climbed up the first level easy enough and although the top portion was locked, I was able to see the garden up close.

Mom enjoying a pizza at the chocolate and wine restaurant.

I grew up only two miles from one of the best botanical gardens in the country, Longwood Gardens, and have had the joy of seeing some beautiful artistry. But even with that comparison, I was very impressed by the clean lines of trees and flowers and the symmetry that went on and on up the hill to the temple at the top. The Baha’i religion is fairly new and I don’t know much about it, but they sure do have a wonderful garden in Haifa overlooking the port and the sea beyond.

From the gardens we drove to our lunch destination at a wine and chocolate shop. This was a happy place for me. We had a yummy pizza for lunch and I got to sample all four of my favorite food groups; chocolate, wine, bread, and cheese. They also had a very cool system for people who bought some sort of membership or subscription—a vat of wine stood in one of the dining areas where you could bring in your own bottles and fill them up with the current selection of wine. Yes, I want one for Christmas. Filled and smiling, we made our way to Akko.

The Crusader Latrines at the castle at Akko.

This ancient city’s name is spelled a number of different ways; Akko and Acre among them. It has excavated castles and ruins, some built back in the Roman times and most of the current structure that has been unearthed stems from the Crusader period. It had been buried for a long time because the Bedouin leader who took control after the Crusaders, filled most of it with sand, knocked off the top part, and the built upon that. In more recent times it was used as a prison by the British during their occupation. In addition to parts of the castle including a Knight’s hall, a dining hall, tunnels, a sort of morgue, and a courtyard, we also toured a Turkish bath house (complete with a cheesy movie narrated by a fictional Ottoman). We learned a lot about the history and the centuries of invaders, but to be honest, I pretty much walked away more impressed by the Crusader latrines that had two levels, rows of toilet seats, and a sophisticated system of plumbing (at least for those days).

Looking down the Hippodrome at Caesarea. This middle part is where the chariots raced around.

Down the coast we made a stop at a national park that was known in ancient times as Caesarea, a city built by Herod and named in honor of the Roman Emperor. I liked touring these ancient ruins and the location was lovely. My blood pressure always goes down when I’m walking along the sea coast, so a stroll down the path along the hippodrome was calming, even with the sea spray covering us and cooling us off.

We watched a great movie about the city and its history before walking up to the theatre. The seats seemed steep and we could see some of the original stone. As we descended the steps, a modern company of thespians were setting up for a concert of sorts to perform later. From there we stood among a few leftover pillars of Herod’s palace.

Caesarea was also the home of the Roman centurion, Cornelius, who was the first gentile convert to Christianity. He was a God-fearing man who was given a vision. He sent for Peter, who came to visit with him. This was a monumental event, because the Jews—the first apostles were all Jewish—did not mix with gentiles. It was considered an unclean act. But Jesus wanted His lessons and His grace extended to everyone and now it was time to spread the Word to all parts of the world.

An ancient Roman aqueduct near Caesarea.

Nearby we made one last stop at a section of an ancient Roman aqueduct. It was massive and stretched on for what looked like a quarter of a mile. It had large openings where some lovebirds were getting their wedding photos taken.

Our final destination was Tel Aviv, which I’ll cover next time.

If I climb upward on the rays of the morning sun or land on the most distant shore of the sea where the sun sets, even there your hand would guide me and your right hand would hold on to me. 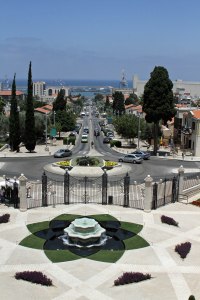 A view from the first level of the Baha’i Gardens out to the port at Haifa. 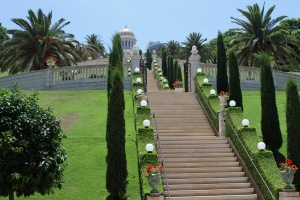 Looking up the steps to the temple building of the Baha’i Gardens.

The main courtyard area of the Crusader castle at Akko. 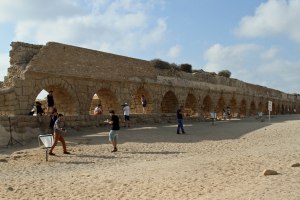 The Roman aqueduct near Caesarea. 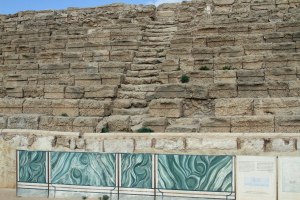 The stands of the hippodrome at Caesarea. The colored blocks are depictions of how the walls were decorated back in its heyday.

The remainder of the palace at Caesarea. 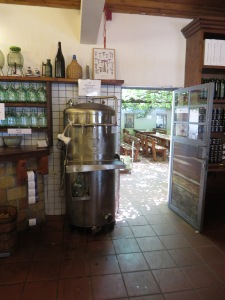 The self-service wine vat at the restaurant.